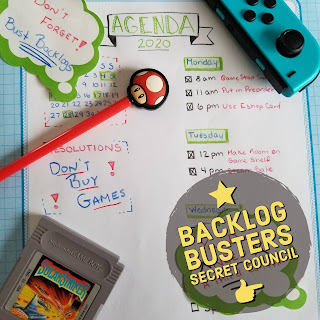 The first Backlog Secret Council is about to begin.

As the year has begun and the first game has had its ending revealed it is now time to move on to the second game of the year.  Following the rules of the B.A.C.K.L.O.G. challenge we are onto the letter A.

While my mind was basically made up heading into 2020 a discussion and a purchase has changed that which led me to form the Backlog Secret Council.

Alien Isolation was going to be the game.  I had gone through my games and the only other one really in contention was Alan Wake: American Nightmare.  However, after hearing Ryan Turford gush about Alien Isolation I had no choice but to make it my A game of the challenge.

That was until Assassin's Creed brought it's ugly head into the mix.  Not the Assassin's Creed of old but the much more hyped and talked about games that brought a breath of fresh air into the franchise.  Origins and Odyssey. Ahhh yes, there was the sale on Xbox where you got both games for $25 and that helped spike my interest.  I then threw a twitter poll up and everyone kept talking about how great the games were.  So it happened that these two games entered into the conversation.

From that point there was only one other game that I really wanted into the conversation and that was Astral Chain.  The big issue for this game was that I do not currently own it.  However, following my own rules from my New Years Revolution post, I have been earning money by finishing books and beating games.  In fact, one could say that I have earned enough money to buy Astral Chain if the game happened to survive until the end to become the chose one.

The final factor towards the formation of the Backlog Secret Council is that I do truly love the random element of deciding what game I will play next.  When TrashTurkey and I formed the podcast one of the most fun ideas we had was to let our game go to a twitter vote.  At first I think it was something we thought would be funny but then it grew and became a big part of the show.  When we had guests on we would have them help us select which games went to twitter.

Now that the show has changed I do not want to lose that randomness and thus I have found a new way to incorporate it for myself without forcing my ways onto the new co-hosts.  As the Backlog Busters grows and changes I want everyone to be comfortable and not have to fit into the mold that Turkey and I developed.

Thus the Backlog Secret Council has been formed.
I submit my games to the rest of the Busters and they, in secret, record what their choice is and why they have chosen it.  I will come up with an Intro and an Outro and based on what the other 4 guys have said I will come up with the twitter poll that will help decide what game I am playing next in the challenge.

This should be a whole lot of fun and I can't want to hear the responses and then get them out there for you all to hear as well.