Spectacular probably doesn't mean the same thing you think it means.
It sounds so much better than this will turn out to be, but lesser words won't draw as much attention and we all know I need attention.

It's been about 2 weeks since that season of Lent began and the wife gave me the ultimatum to eat the food she is making (Paleo diet) or cook for myself.  I, Obviously, chose to eat her delicious meals.  My wife's cooking is Spectacular after all!!

In the past two weeks I have eaten Salmon (probably my least favorite of the meals), Gumbo, Steak and Potatoes, Chicken with Sweet Potatoes and Broccli, Beef Minestrone,  Fajitas, and some other stuff I am sure I am forgetting.  I have been eating well, but healthy and as a result dropping some pounds.

In theory Darkest Dungeon is a game that I should love.  It has some amazing elements to it. Party Management, Death, Items, weapons, Alcohol and Brothels.  I'm going to chalk this us to the game just is not for me Right Now!  I'm sure a time will come later when I'll try to play this game and it will click and I'll put 50-60 hours into it but right now I have to move on to something that is clicking with me. 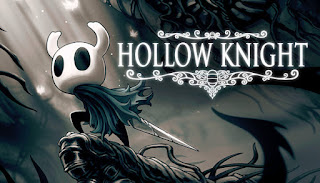 A couple months ago I tried Hollow Knight and after 10-15 minutes I put it down because I didn't compare with The Messenger or Dead Cells (which I'd completed both of them slightly before).  So I put it to the side to come back to at a later date and give it a fair shake.

I'm now about 2 hours into the game and liking it a lot more than my first go round.  I started the game anew and within 5 minutes ran into the guy who sells you the map of the place and from there I started grinding to get myself the compass and other items that the Mapmakers wife sells.   I'm still working my way through the first map, trying to unlock all the areas and save up enough money (whatever it is called in this game) to buy all the items in the shop so that I can mark every point of interest on the map to come back to later if need be and I am liking the game a lot more.  However I have a sense of dread as there is a logo in the middle of the map that I assume is a boss fight and I have been lead to believe that Boss Fights in Hollow Knight are not to be taken lightly and that I've got a lot of deaths in my near future.

The biggest thing I have learned over the past couple of hours of play is .....
Oh Dear Lord yes - A Bench - My life is Complete!!!

We have a little over 1 week until our next Podcast Recording.  This means we need questions and answers sent to us to discuss on the show.
We have a pretty good show lined up for you and, I know I keep saying this, we also have some big surprises for later in the year.
Will we have another Rumor Segment?
Will we have adopted anyone for the episode?
Will we keep you entertained for nearly 2 hours with all new material?

Probably not, but questions make the anticipation more Spectacular!!

The latest Nindies Showcase was pretty damned RAD!  Cadence of Hyrule (while not for me) probably has a lot of people going crazy for yet another licensed property.

Katana Zero looks like a fun action game that I want to pick up and speaking of Action Games - Pedro looks like it might be the most fun of all of them.

Pine and Neo Cab are both games that I'd be willing to check out if the price was right.

However, the big Reveal was Cup Head!
If you listened to the last Backlog Busters I talked about Microsoft and Nintendo sleeping together and creating beautiful babies.   The first baby to be born is the Cup Head Port. This is a game I will definitely pick up because I like the genre, I like the art style and I have been told I will like the Soundtrack.   I just hope that I'll have the ability to push through and beat it.