What Be The Happs #Backloggers,

It is I (stolen and all) grrouchie serge here to give you an update on everything backlog related, and oh do I have something for you. 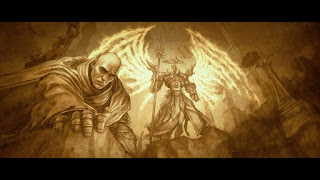 I have put a lot of time into Diablo 3 over the years and I have a feeling that the Portability of the Switch and the Season Mode that they have will have me coming back every couple of months to bang out high level characters and get exclusive loot.  I love Exclusive Loot!  I put over 100 hours into the 360 version and the PS4 version and for the Nintendo Switch version I have already racked up over 35 hours.   I completed my first season and I ran my way thorough the season.   At first I set the game to the easiest setting to run through the story but that was too boring and too easy so I kept cranking it up a little here and there and by the time I rolled credits I was up into Torment again and still running through it with no issues.  This means that I'm overpowered and my Paragon Points have added some serious fire power to my Toon(s)!  So, Scratch another game off the backlog as 2019 is the year that I catch up (*cough* ain't gonna happen).

Up next is a game I didn't expect to be playing nor completing but that is Bulletstorm: Full Clip Edition on my PS4. 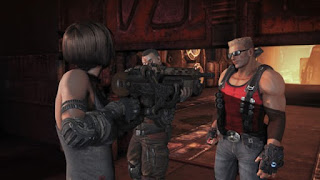 Bulletstorm is a game that was released many moons ago originally on the Xbox360 and the PS3.  It was, in 2017, Re-released on the Xbox1 and the PS4.  I had originally played it free on the 360 for probably less than 2 hours and threw it aside as something I just wasn't interested in at the time and then picked it up free again on the PS4 via that subscription service known as Plus.  Never planned on playing but I'll claim the free games just because, ya'know, right?  Enter my 4 year old toddler who likes "shooting games" because his brother had the ill practice of showing him Fortnite awhile back.   My lil buddy wanted to play a shooter and I scrolled through my PS+ games and found a few but knowing that Bulletstorm is more over the top and fighting aliens and such I decided to let him play this (I choose the options to tone down the gore and the language before starting him on Easy).
If you want an over the top shooter and feel that Gears of War just isn't outrageous enough then you can safely turn to Bulletstorm, which was created by People Can Fly (who, incidentally helped work on some of the Gears games plus Developed that one Gears game that wasn't a mainline story game and, oh, they helped work on a minor game called Fortnite as well) and it is a love letter to old fashioned Bro Shooters from a couple generations ago in the "I don't take myself seriously" vein.  Think Serious Sam and Duke Nukem.
Speaking of the Duke (not David) - After you beat this game you get the option of stating again with all your upgrades and playing as Duke himself.  Hail to the King Baby!
Watching Jacob play the easy sections and helping him through the harder ones, the timed events, the boss battles and the "Dad I ran out of bullets and need help" Sections really had me digging this game.  I'm not generally into shooters but I had a blast when I was playing this game and really enjoyed watching my son play his parts as well.   This game is well worth a play through for someone looking for a few hours of fun.

And then Finally.
my meh moment. 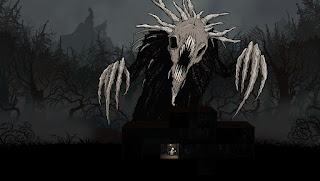 I talked a little about Knock Knock in my last post and it is a game I got for free through the #IndieSelect program.  I love me some horror and creepy and this game looked up my alley as something I could play on my lunch break at work and during the witching hours at home.  There was a good amount of creep and looking back on it I believe that I mostly enjoyed the game.
Mostly
There was just too much that I didn't like to give this one a solid recommendation.
For the most part I really didn't know what I was doing in the game.  I didn't know if I was properly advancing the story or if I was doing things right or wrong.  There were obvious times where I knew "well, I shouldn't have done that" because it would take me to a dark hallway and the "day cycle" would start over.
When I thought I was doing well I'd reach a point where night would end and I'd be forced to go outside of my house and walk around aimlessly until it let me back into the house and then my "day cycle" would advance.
In the long run I guess what I thought I was doing well I wasn't and when all was said and done I ended up with what I am told is a "Bad Ending."
You see the screen shot above?  That guy appears on the last night and when night is over you wander outside and eventually it tells you "GAME OVER."
And that is it.  No credits, no showing you what bad happens, just game over then a white screen that lets you choose New Game or Continue.
Continue starts you back over on the Last Night with Dr Doom hanging over your house waiting to, I guess, murder you again.

Maybe the allure of the game is that it is short and you can go through it again and make different choices?

I don't know.
I do know the game gave me chills on several occasions.  The last scene where you are outside the music and atmosphere gave me chills but the ending was anti climatic.
I wanted more, even for a bad ending.
I wanted to learn something.  Learn where I went wrong so that I could go through it again and try to improve and get a good ending.  None of that happened and as a result I am left feeling meh.


Current Backlog: 50 (still haven't added other systems)Beat YTD:  6  (This is a crazy number, I know)Shelved YTD: 1

Currently Playing:
Fallout Shelter
State of Mayhem
Looking for a new Sidelog to attach myself to.