Today I'm going to do something a little different and that is give you a review of a Nintendo Switch Travel Case that I have been using recently.

The case can be found on Amazon for your viewing convenience and just as an FYI this case was provided to me by the company for an honest review.

Here is the case in it's closed glory with the company's name fully visible, Bestico.  You'll notice that it is a bit larger than  your standard Nintendo Switch Case and this is what I was looking for when I decided to test it out.  I had one case that I really liked but the only thing I could fit in it was the Switch and some game cartridges.   This was causing me some annoyance when going to work because I also wanted to bring some accessories.

This led me to an over the shoulder Switch Accessory Case which was pretty good but led to one big issue for me and that was where to store it during work since I only have a small locker for my stuff.

So, that led me to this Case. 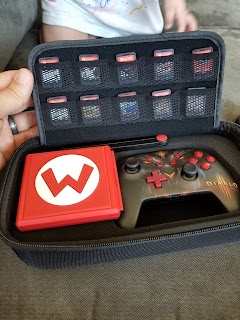 What you are looking at is the bottom of the case.  Here there is a Foam Cut-out where you can see I have thrown my Diablo 3 Power-A Switch Pro-Controller in.  Beside it is my Mario Cartridge Case and underneath of that is another hole where I put things like Double A Batteries, my Genki Blue-Toooth Adapter and extra (small) cartridge cases depending on how many games I am attempting to carry around with me.

Above that is the Flap that separates the stuff you store on the bottom and when that is folded down you put the Switch on-top of it.  As you can see there is also a convenient netting which is set up to hold 10 loose Nintendo Switch Carts and I have them all filled just for reference.

My Minor gripe is that the cut-out where I have my Diablo 3 Controller is meant for the Grip that holds your Joy-cons instead of a Pro-Controller.  When you close the flap and then set your Switch on top, the Analog controllers stick up just a little too high and your switch rests on them.  I combat this by taking the batteries out of my Diablo 3 Controller so that it doesn't accidentally turn on over and over.  Those batteries are easily stored in the bottom of the case. 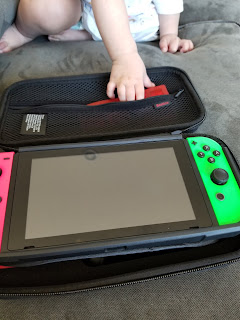 Here you see the top portion of the Case with the Nintendo Switch already sitting in it's special area.  I did not secure them in this picture but under my Switch are two little straps that you put the switch into so that it holds the Switch in place when you are in motion.  Also you can see where my "I get into everything" daughter's hand is there is a zipper where you can store more things.  What she is grabbing a hold of are two small cases that each hold four Switch carts but you could also put in a bunch of things like charging cables, batteries, adapters, etc.  If I were to turn the switch upside down during travel those things would be perfectly fine but if you are going to travel with your switch face up like in the picture I would not recommend hard items in there that could bounce off the screen. 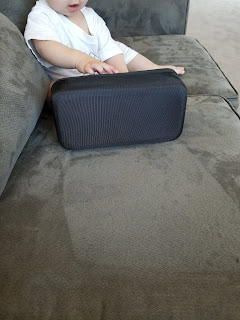 Here you see my young trouble maker grabbing a hold of my Travel Case with evil intentions.

Shortly before (and after if I'm being honest) she decided that it would be funny to take that case and push it off of the couch.   I decided this would be a good opportunity to test how well the case held up.

Everything packs in the case pretty well and the case is secure enough that a few drops off of my couch only moved around the smaller pieces a little bit (but, that is what small pieces do now isn't it?) but the main components had no issue.  The controller stayed where it was.

The Switch also didn't move and the jostling didn't cause the SD Card to dislocate nor did it cause the actual video game cartridge to dislocate either.   All in all I was very happy with the way things packed into the case and how they reacted when my trouble maker got a hold of it. 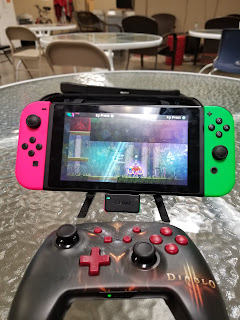 Finally what I have here is my work set up fully realized thanks to my Bestico Nintendo Switch Travel Case.

That is my Nintendo Switch with the Genki Blue-Tooth adapter plugged into the bottom (so I can ignore everyone around me and become emerged in the game I am playing).  The Switch is resting on a kick-stand that comes with the Genki and finally you see my sweet, sweet Diablo 3 controller sitting in front which I was minutes away from grabbing and playing my game with.

You can kind of see my Bestico case resting behind my Switch waiting for me to pack everything up and get thrown back into my locker after lunch is over waiting for me to go home and start playing all over again.

In conclusion I really do like this case a lot.  I have had it for over a month now and it is the only case I have been using.  In fact I just packed it up and took it on vacation with me where it made several trips to and from the beach, the pool and my hotel room.

If you are looking for a great case at a low price then I recommend this case.
If you pick it up I'd love to know what you think about it after you've had a chance to use it.