That is what I wanted to call my island but I was informed that this probably wasn't a really good idea.  I'll get to that in a minute.

Do you remember the great quarantine of 2020?  It was awful.  It was taken as a joke at first but after a while, when people realized how real the situation was, everything went downhill.  Luckily before all of the really bad stuff happened I ran into a stroke of luck.

Does everyone remember a golfer named Tiger Woods?  Remember when he was on top of the world and the money he had?  When the pandemic took over the world and the quarantines happened Tiger was stuck in Las Vegas.  I ran into him down on Tropicana near the Budget Suites, yeah, where the real dirty hookers work.  Let's not discuss why I was there but, instead, let's focus on my amazing luck which was running into Tiger.

Tiger had a look of terror in his eyes but must have been showing his last bit of humanity because he saw me and actually yelled, in his best Arnold impression, Get To The Choppa.

This, oddly enough, was when I noticed that there was, indeed, a helicopter in the Burger King parking lot.  I also noticed some crazy sick looking people running after him, screaming.  Did he not leave a big tip? Were the sick and carrying the disease?  No time for any answers because I only had time to turn and run, to the choppa.

So, yes, I ran.  Tiger beat me there because he is still skinny and spry and evidently I'll need to consider golfers as real athletes.

In the helicopter I noticed two kids and the pilot.  The kids look like they could have been Tigers but I can't be sure.  All I remember is that I looked at one just as he syringe entered my neck.  Pain ran through my neck for a brief instance, my vision blurred and everything stopped.

My next memory was lying on a tropical beach.  I assumed I was dreaming but it all seemed too real.  I had to get up and explore. I had to figure out how I got here and what I was going to do.

Over the course of the day I ran into Tiger and the two kids, only now they were racoons.  Yep, how do you like that transition?  But it is what happened and this is my story so I stick my tongue in your general direction.

I find out that they are named Timmy and Tommy and Tiger is their uncle.  I also find out that this island is one of the many that Tiger purchased before he had to give his ex-wife half of everything.  A guy like him paid people to hide assets and this island was one of said assets.  Tiger had us flown here where we would live out our days away from the crazy pandemic that was happening through the rest of the world.  Nice guy, I guess. 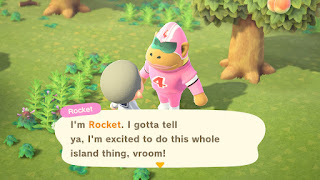 As I was getting to know Tiger I find out that he had a distortion filter installed on his island so that when anyone viewed it all humans were changed to look like animals.  He said it was to help him lay low when he needed to get away, kept the paparazzi away or something.

While exploring I did run into two other animals.  Rocket is a full grown monkey wearing all pink who is quite excited about island life. 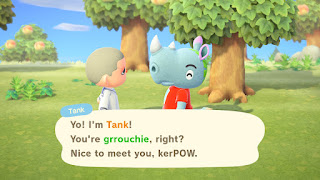 Tank is, quite literally, a tiny rhino walking around and trying to sneak his catchphrase, kerPOW, into most conversations.  They don't seem to bright because I have had to help them make basic decisions.  However, I feel that they could just be letting me develop a since of friendship with them to let my guard down.  I'm still unsure what to make of this situation but there are six of us on this island and so far i'm confused and just trying to survive.

Tiger set us all up with tents and cell phones so that our lives would be more comfortable.  The cell pretty much just feels like it communicates inside the island only, but I'll take some sort of home comfort any day.  Now if I can figure out how to put a game or two on it. 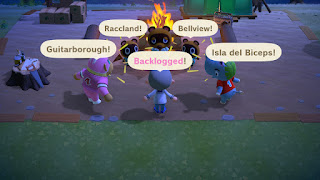 At the end of the first day we all got together to name the island and I suggested Pandemic because that is the reason we are here.  I received many looks that told me it was not a good idea.  From there we all talked about it a little bit and decided that Backlogged was going to be the name.  Our life just got backlogged and we are starting a new adventure.  Will we live out our end of days here or will the outside world recover so we can go back to our previous lives?  No one even wants to talk about that subject.

After our little group meeting Tiger pulled me aside. 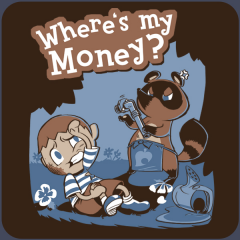 He explained to me that life on the island is not free.  I will have to pay for my housing, my phone and other things as they come up.  I was also informed that my flight was not free.  I can do chores and tasks that are given to me by the 3 Ts (Tiger, Timmy and Tommy) that I can use to buy new stuff and pay off my debt.  He also told me he was feeling overly generous and was going to start my debt out at 50 thousand Bells.  We obviously have no old world money on the island so our new currency is Bells.

I felt a bit intimidated by this conversation.  It didn't feel fun and carefree like the rest of the day did.  However, I am still alive and i'd like to keep it this way.  So, yeah, I'll need to start ordering bells.  I don't want to stay indebted to Tiger, I want to get on his good side.  His generosity is probably the reason I am alive so let me pay off my debt and try to live debt free.

This was all typed on my Tiger provided cell phone.  I don't know if any of this information will get out there or if this version of the web starts and ends on the island.  I've tried calling loved ones but get a dead signal.

Life is about to get interesting.

Drop me any comments as this story can be shaped by you, dear reader.  I just want an excuse to type so lets see how long this continues.