Welcome back to Backlogged, my continuing adventures in Animal Crossing.  You can go back and read the first entry of the series here.  If this is amusing you then feel free to share with your friends.  I would like to make this an ongoing series.  Also, leave a comment below and if you visit my village leave a message on the bulletin board.  Extra points for creativity and I will try to work your messages into my story.

Now - To the main story.

I worked hard to clean up the island and earn my keep over the first couple of weeks.  I saved up my bells so that I could pay off my debt and hopefully live a more peaceful existence until (or if for that matter) life went back to normal. 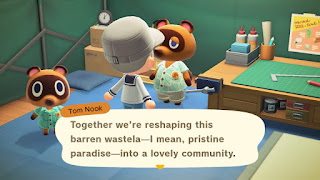 I went to Tiger to talk to him about potentially upgrading my casa and continuing to make improvements to the island.  The conversation was curt and his tongue was sharp.  He spoke of reshaping the island and building it up into a thriving community.  It felt as though he was trying hard to choose his words and make it seem like we were all working on the same page but the true feeling I got was that I was on the bottom end of the hierarchy on this island.   Nothing about our conversation made me feel comfortable. 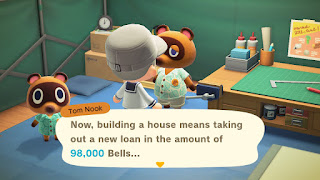 The conversation switched from community directly into another loan.  I tried to express my concerns about constantly being in debt and feeling like I owed him something just for saving me and Tiger assured me that I should not feel that way.  If I wanted to upgrade from my tent to a house it was going to cost me 98,000 Bells.  I could take out an easy loan with a great repayment plan or I could just work like crazy and save up the money while living in an uncomfortable tent.  I informed him that I am choosing to live the debt free lifestyle and I would continue to work hard on the island and save up any Bells I earned until a time came that I could afford the upgrade.  Tiger, annoyed, told me to play it my way and walked away without another word. 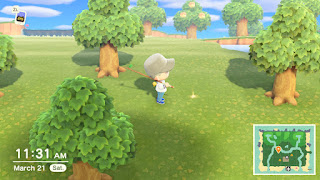 A couple of days later I was cleaning up some leaves that had dropped when I heard some strange noises coming from somewhere near me.  Voices in the distance with a little bit of Heavy Metal music in the background.  I glanced in all directions and saw nothing but the sounds kept coming and going.  Voices whispering to come hither and sending shivers down my spine.

I backed up to a tree and tried to focus my senses to find out where the sound was coming from a voice entered my left ear and worked its way around to my right ear.  My skin started to crawl as there was no one around me.  Finally in the distance I heard a shriek that sounded like it was saying HERE and all the hair on my body was standing at attention.  I slowly walked towards where the shriek came and noticed a crack in the ground with a weird glowing light coming out of it.  As I inched towards the anomaly the voice was coming faster and faster telling me to come closer and closer.  Standing a foot away I felt something from behind push me towards the opening and I fell.  In fear, my eyes closed as I fell to the ground.

Face down and seemingly inches away from the strange opening voices were coming and going and the gravity of the island seemed to double or triple.  I felt like my body was being held down, almost sucked down to the ground so that I could not move.  I clenched my eyes tight.  I didn't want to look. I feared to open my eyes.  The voices where whispering, echoing in my head.  Nonsensical words but constant as if they were trying to find their way into my head.  Moving ear to ear looking for a way in. 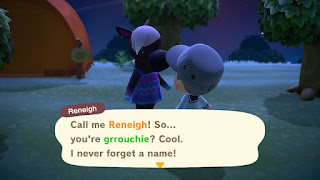 Suddenly, everything stopped.  Pure silence.  No more force holding me to the ground.  I slowly opened my eyes and it was dark.  I sat up and looked around.  A dark donkey like figure was there waiting for me.

"I was wondering if you were ever going come back.  My name is Reneigh."  The words slithered off of her tongue. She spoke slowly, almost like she was trying to intimidate me.  I opened my mouth to speak and she immediately gave me a Silence gesture, suggesting that I am here to listen and nothing more.

"You're grrouchie right?  I know that is right, I've been supplied with a file on you."  She knew my name.  The chill on the back of my neck was back.  "Well grrouchie.  I need you to remember one thing from this conversation and that is that Tiger gets what Tiger wants."

Her cold look felt like it was piercing through my eyes and into my soul.  I was looking back but nothing phased her or changed her perspective.  She stared straight into me and talked through me.  Her words were crisp and direct.  She spoke with authority.  "Tiger will not force you to do anything, he has ways around that.  He will make suggestions and give you the illusion of free will.  Make no mistake, you will do as he pleases.  Step out of line and there could be consequences.  Nod if you understand me."

Without thinking about my actions I swallowed slowly and nodded my head.  I understood what she was saying and if it were true then my life on this island might not be as carefree as I was hoping.

"Good grrouchie, I'm glad you understand me.  Hopefully we won't have to run into each other very often. But, know that I never forget a name!"  With that she lunged forward with her head.  I closed my eyes and braced myself, waiting for a blow that never came. 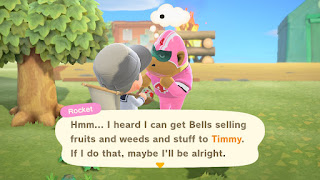 When I opened my eyes the sun was back out and I could hear the noises of the wildlife on the island.  Rocket was standing in front of me and telling me the virtues of selling fruits and weed to Timmy.  One line in particular caught my attention before she walked off to go gather more fruits.  "If I do that, maybe I'll be alright."

Maybe she'll be alright?  It sounded foreboding. It sounded as if maybe I wasn't the only person who had a very personal visit with a message that caught my attention.  What is really going on with this island.  Why were we brought here?  Was this not a stroke of luck?

I had a lot to think about.  I grabbed my fishing pole and decided to go clear my mind and try to sort things out. 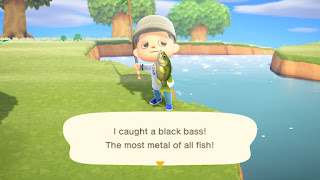