Today was a rare day off of work where I didn't really have anything to do.
Except Laundry, pick up after the kids, run to the grocery store, do the dishes from yesterday and change poopy diapers.

With that being said I did manage to sneak a few minutes of gaming in.

One of my main goals for 2019 is money management especially in regards to video games.  In order to help me achieve this goal I am looking for opportunities to add video games to my collection without actually having to pay for them.

First I would love to shout out (just like I did on the podcast) Fudo who is an amazing soul with a Deadpool obsession who also happens to have connections and gives out fun little things like codes to Switch games and eshop credit.

Recently I happened to win one of his giveaways for a game that I was definitely going to get and that is Travis Strikes Back: No More Heroes.  While I have only put about an hour or so into the game so far (mostly because I have been finishing up other things first) I am extremely grateful to have won and will sing his praises every chance I get.


Up next is IndieGamerChick who runs a program where indie developers get codes out to her which she gives away with the caveat that you must play the game immediately (put it above your backlog) and make at least two tweets out reviewing the game in some manner, preferably with screenshots.   There is slightly more to it than just that but you can read up on all that jazz HERE if the mood strikes you.

I have used her service three times so far and have been happy about it 2 out of the 3 times.

My First game was me hastily rushing into a game because I just beat The Messenger and that was One More Dungeon.
One More Dungeon is a Minecraft styled First Person Fantasy Shooter where you are exploring dungeons, killing beasts and looking for....
Well.  Honestly I cannot tell you a whole lot about this game as I couldn't get into it for various reasons.
First, I guess I just can't get into the Minecraft look.  Second there was something about the movements through the dungeons that I couldn't get past.
In all honesty I wanted to get into the game because it felt like an Indie Doom or Wolfenstein (you know, the old PC versions from back when your parents were young) but it was just not for me.  I gave it a go and ended up giving it up.

State of Anarchy: Master of Mayhem
This is a game that was on my want list for a while now because, well since Gunman Clive on the 3ds I've kinda been digging the stick figure vibe!  State of Anarchy is a top view old school looking like the OG GTA's where you run around (and drive around) and shoot the bad guys until you get to a boss and make him go KA-POOOT.
This game has a LOT of levels but they are all self contained and you can spend as little as 5 minutes running a level or you can, like me, die over and over and over and over and over until you switch hits the wall and shatters into a million pieces.  SCREW YOU LEVEL 10!!!
Check out LapovichGames on Twitter and also buy this game and curse it out with me. 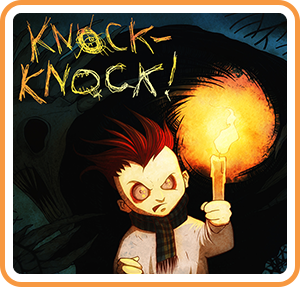 My Final #IndieSelect game that I currently and working through and cursing (mostly because of my stupidity) is Knock Knock.  I've been in the mood for a horror game and when this showed up from IGChick I was like "Sign me up sparky."    Knock Knock is a slow paced psychological thriller from Ice-Pick Lodge  and is mostly self contained in a house.   Your protagonist appears to be slowly losing his mind and every night he wakes up and has to check out all of the rooms in the spooky house, turning on lights and unlocking doors.  There are occasional knocking noises, breaking noises, doors locking and glass shattering to direct you where to go and the underlying soundtrack is horribly spooky and if you are playing at midnight while everyone around you is sleeping and you've got headphones on in pitch black darkness this game will give you some chills!

There are some parts that drag me out of the game where it becomes pitch black and you have to walk around until you see the outline of the game.  This generally means that you screwed something up and will be repeating the last Mission? Night?  from the last save.
Also, if you survive the night you'll have to go check things out outside which means running around in the woods for a little bit and then coming back into your house.
I'm only probably 25 percent through with the game or so and I have repeated a bit more than I want to admit but this game is one that I plan on finishing.  Sometimes I have no idea what I am supposed to do but the creepy factor and listening the the main characters speech keep me coming back.  Plus, I gotta figure out where the story is taking me, why my diary is missing and why I keep finding pages from it scattered across the house.   Also, why is the main character convinced that he didn't write some of those entries?  Will he go completely insane or can I help him survive the horrors that await me and bring him some peace?
I can't wait to find out.

Other than that (and that is a lot for a guy like me) I have been sinking some more time into my old friend Diablo 3. 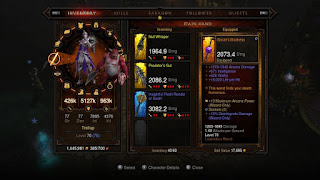 I finally finished off my Seasonal Journey, meaning that I have gone through the first 4 Seasonal Chapters in order to obtain all of my super special seasonal gear.  I was Level 70 Paragon 70 when this happened.   While I really want to mark the game as beaten/completed because I did what I set out to do I didn't really play through the campaign to roll credits and the #Backlogger in me has a strong belief that I need to do that (even though I've beaten the campaign multiple times on 360 and ps4 already).  So, this is being regulated to the side log as I put a little bit of time into it here and there to solely progress the story once more and roll credits.   However, it is almost February which means I'll be playing Ikaruga (unless something weird happens).


So, February looks to be an interesting month as I Juggle Ikaruga, State of Anarchy, Knock Knock, Diablo 3 and Fallout Shelter.  Out of the Five of those games State of Anarchy is the one I fear that will drive me insane and I may never beat it.

Until I come up with some cool designs or text - you get boring plain text for this next reoccurring part.


Keep on Backlogging and let me know what is keeping y'all up late from the gaming spectrum!