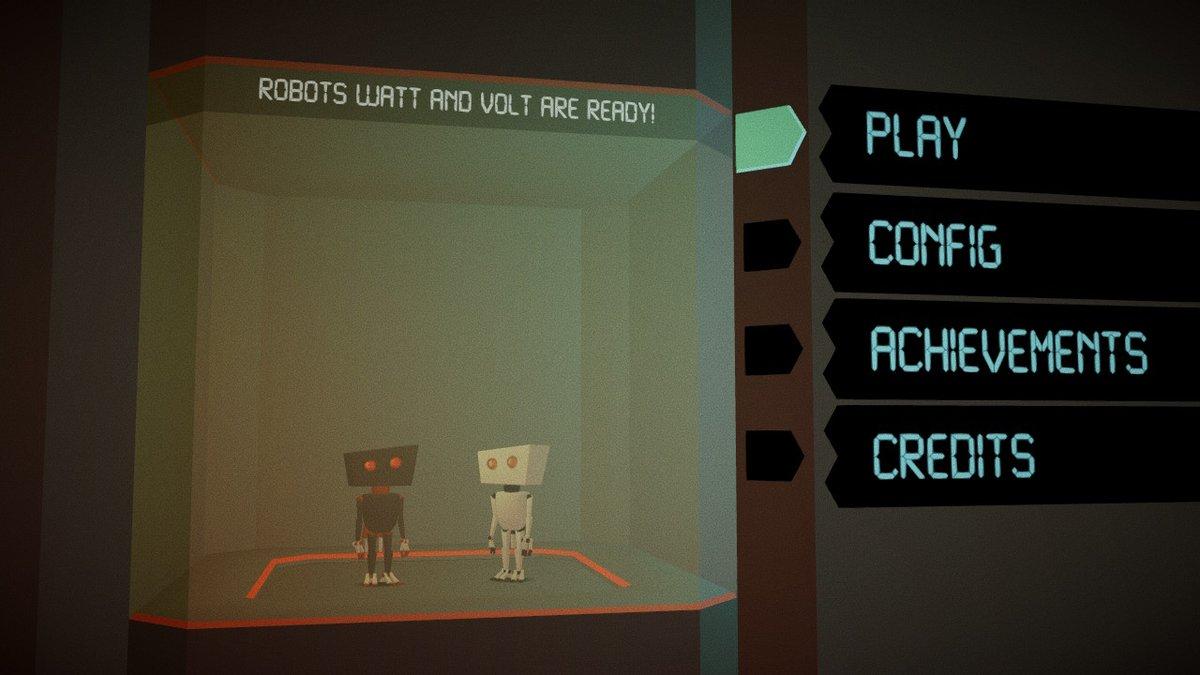 Recently I received a code for Twin Robots: Ultimate Edition which was developed by Thinice Games and published by Ratalaika Games for the Nintendo Switch. I had never experienced this game other than seeing it pop up on sale on the eShop. I may have seen a few pictures but nothing that caused me to hit the purchase button. I am glad that I did not. It might be an acceptable game for around $2, but it will bring disappointment if you spend the retail amount of $6.99 US.


I will admit, however, that the premise sounded interesting. You control two robots aptly named Watts and Volt who are trying to escape from… somewhere? It looks like a manufacturing plant or a sadistic gauntlet used for testing the ingenuity of freshly minted robots. Your goal is to safely guide both robots to the exit, but it isn’t as simple as it may seem. Please know that at any time you can switch between the two robots and even share energy (more on that in just a bit). 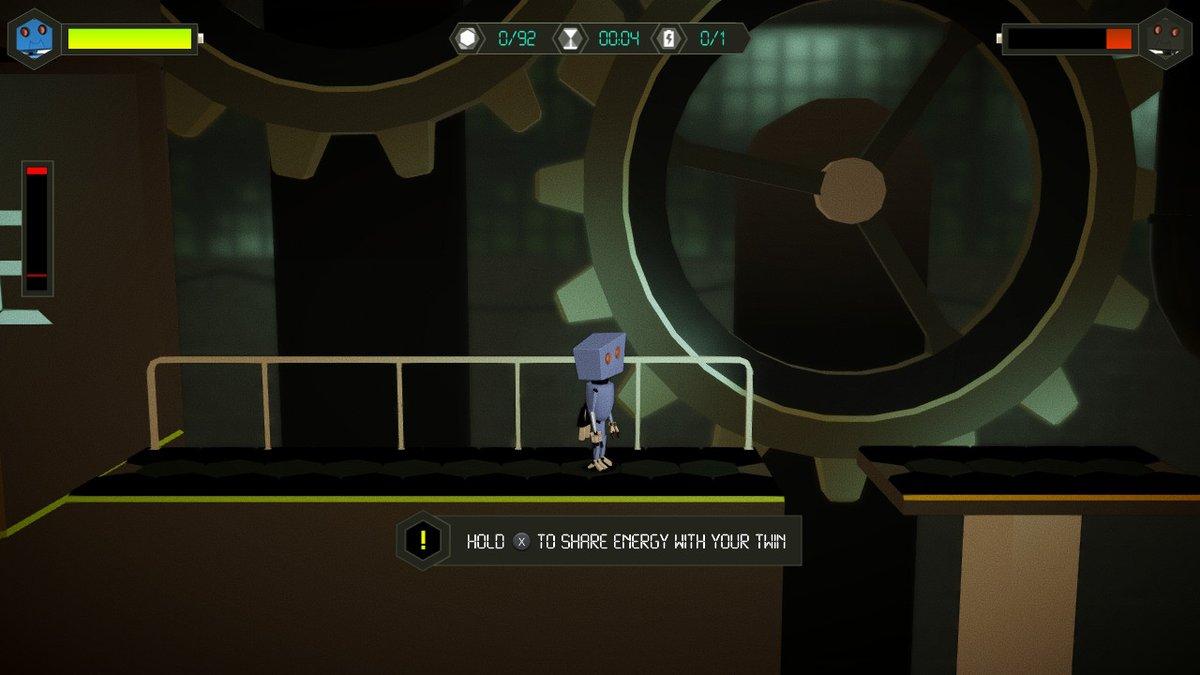 At the start of each of the 40 levels, one robot is trapped in a chamber with a constantly lowering ceiling. The other robot must locate and press a red button that will simultaneously stop the compression and open the door to the chamber. All that is left is to locate the exit. Along the way you will run into bloodied spikes, guillotine blades, energy-depleting lasers, crushing pillars, and poisonous gas. Some obstacles slowly deplete your energy while others offer an instant, and frustrating, death. 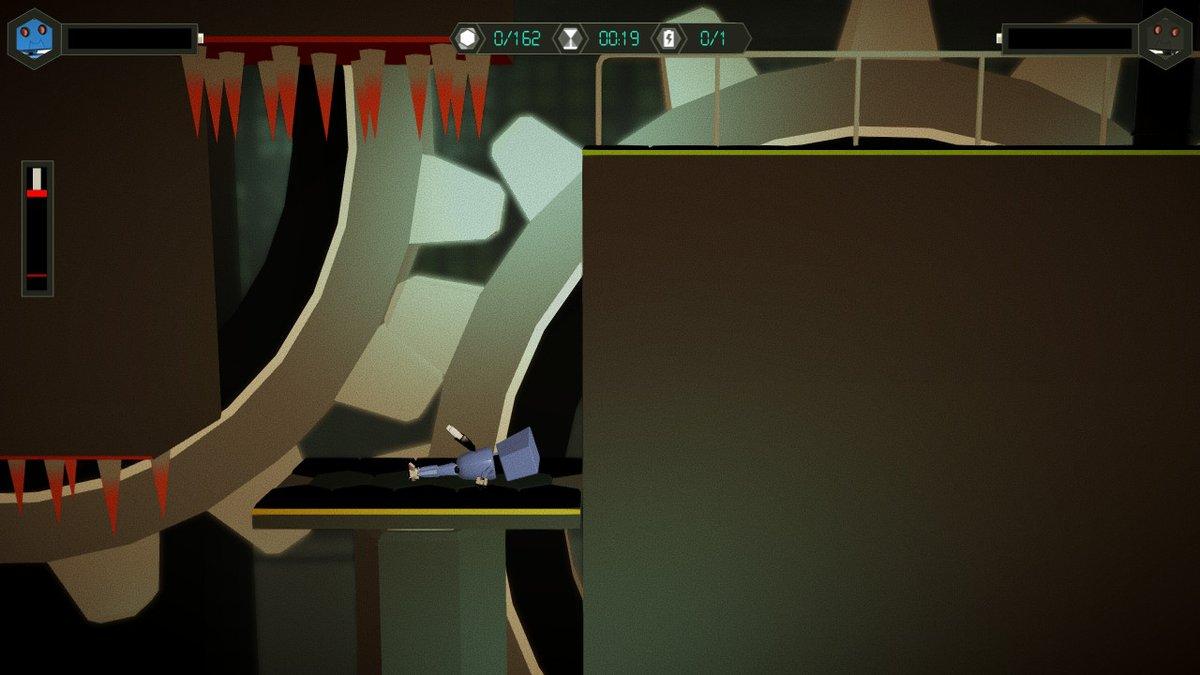 Energy. That is one thing you will have to manage along with the other menaces in each level. Every action you take requires energy. Running, jumping, pulling boxes, etc. At the end of each level, you will have to have enough energy left over to charge the door in order to exit. The robot that is “free” at the start of each level has plenty of energy to find the red button, but the robot that begins in the chamber has very little energy. Fortunately, when the red button is pressed, energy tiles that restore small amounts of energy will dot several of the floors. You must collect these in order to stay alive. You can also share energy between the robots. (It is useful, but I rarely found it to be necessary.)

Each level also contains either one or two batteries which will restore an even greater amount of energy. These are usually hidden or in hard to reach places. There is a sense of completionism in the game where you feel you must collect all batteries and energy tiles. It even tracks the time spent to complete the level. This is all in an attempt to get the player to replay levels to improve their time.

Unfortunately, every level looks and feels the same. They are dark, and the same elements are used over and over again. The only change is their location. Every once in a while a new puzzle element was added, but by that time I had already become bored with the game. The music never changes, so you will get to hear the same track for 40 levels. 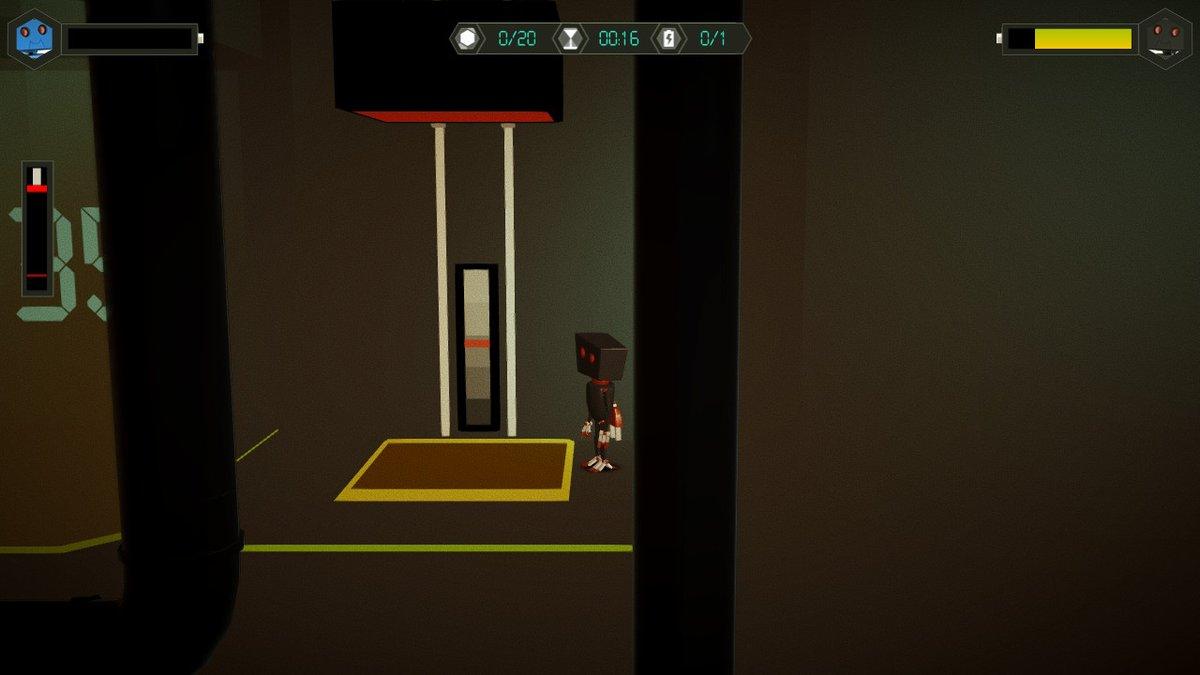 I had a bit of hope with this game. The idea of having to control two different characters to reach a goal made me think of The Lost Vikings, a SNES game made by Interplay. In that game you swapped control among three Vikings who each had different abilities and skills. Sadly, in Twin Robots, they are exactly the same except for their color.

The one good thing is that the controls are good. I never felt like the controls were sluggish or unresponsive. They handled well, and when I died, it was typically my own fault.

While there are achievements, they are not very challenging or worthwhile. Most of them happen by default, and the others can be triggered by doing what the description says. I had fun with them during the first 30-60 minutes of playing. After spending a few hours with the game, I just didn’t care anymore. I felt I had to finish the game, and it felt like homework. Not the fun kind of homework where you get to be creative or do something you love. No, it was the homework where you have to look up and write the definitions of all of the key words in a chapter, and then you have to copy each definition 20 times.

As of this writing, I have made it to the 40th level, but I have not completed it. The difficulty spiked dramatically for the sake of being difficult. I might go back and finish it, but I honestly don’t know why I would. The game could have been so much more with better level design and variety. As it is, wait for a hefty price drop or just save your time and money.
Labels: #Backloggers Guest Post Mathman1024 review